It was a pleasure…

…to have known Amy for more than twenty years, meeting her first when she and a two-year-old Rachel moved next door to me into a duplex I owned in Newburyport, MA. If I were asked to choose what it was that first allowed Amy to stand out for me, it wouldn’t have been the fact that she was beautiful or that she possessed an amusing and interesting take on life; a kind of a well-thought out and eclectic curiosity about why we are all here. While those things were certainly true, it would have been the sound of her laughter which first resonated with me. It had the power to lift you, to carry you from any dark or dreary place and it was infectious.

As my kitchen window overlooked the backyard we shared, it was the sound I most often heard coming from there as she went about introducing Rachel to the world of gardening, make-believe and the magic of a tailless dog. So it was first hearing her laugh, unencumbered even through the most difficult times. And then it was that she was devoted to her child or “mad about the guppy” as she would say. She delighted in being a Mom.

Lenore and Amy at the beach

As I was privileged to watch them at play, it was evident then and throughout their twenty-two years together that they shared a bond that was as deep as any and had a language all of their own. They adored each other fully and held each other in a kind of reverence that was unshakeable.

Amy’s disease and prognosis was stunning for us all. This should not happen to a fit, exceedingly kind, well loved and respected individual who simply by her very nature made so many lives better. It should not happen to someone who was quietly living a life that was remarkable in only how very ordinary it was; lovingly comprised of family, friends, work and play. But it does happen and to not only Amy but to way too many like her. All are making an impact in the lives they’ve constructed for themselves; many are a key cog in the workings of a family and in the gyrations of a friendship. And then they find their calm shattered by the Molotov cocktail of cancer, by the lone gunman in the water tower, the random, seemingly senseless onslaught of cancer. 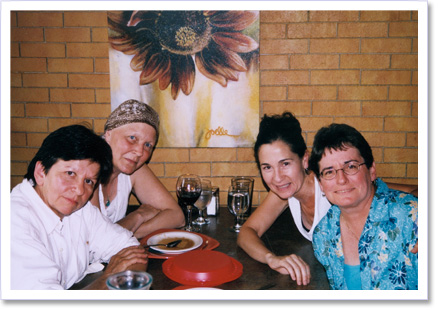 Lenore and Amy dining with friends

I recognized true courage and was awed that in spite of pain and fear, Amy’s humor remained. In the middle of a life interrupted, she continued to possess a deep concern for others. “Everyone with cancer should have a day like this” she had said at a time when being selfish, when being self-involved would have been both understood and excused. To want good for others, to want for this community of cancer sufferers to be “treated” to a burden lifted, to be given the possibility of a magical day was all found in that simple statement. It was humbling for me and yet nothing surprised me about how Amy faced her disease and her death. She was tough and gave it her all, never letting it define her, very rarely feeling sorry for her, and not once losing sight of all she was grateful for. Her humility and poise is a model that when faced with my own mortality, I would hope to emulate.

And so with her passing, Rachel and I, Kelly and Linda, Barbara and Robin, Cecile, Lydia and Janice and all of those wonderful family members, friends and co-workers around us contributed opinions, thoughts and ideas so that we could create a foundation that was most like the individual we hoped to honor. I believe that we’ve succeeded in that Amy’s Treat is kind and strives to lift someone from a dark and dreary place. I think she would be pleased.