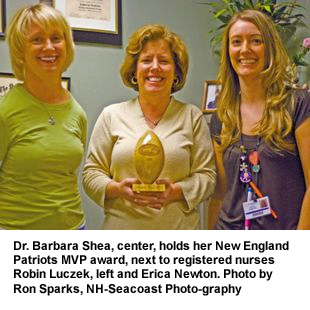 DOVER – Dr. Barbara Shea, medical oncologist from the Seacoast Cancer Center in Dover, was recently selected by the Robert Kraft family and The New England Patriots as a 2009 Community MVP for her volunteer work with Amy’s Treat, the nonprofit for which she is a founding board member and which benefits the patients of the cancer center in which she is employed.

The New England Patriots Community MVP Award honors individuals who exemplify leadership, dedication and a commitment to improving the communities in which they live through volunteerism.

Shea was chosen from a pool of more than 200 nominees and was credited with displaying “a dedication to improving the lives of cancer patients in a way that far exceeds her role as a good and thorough medical oncologist.”

At a luncheon at Gillette Stadium on May 28 to honor the nominee, Kraft, in addition to presenting Amy’s Treat with a $1,500 grant, said of Shea… “Dr. Barbara Shea has been involved with Amy’s Treat since its inception in December of 2007. Amy’s Treat is a way to enable people to reach out to those living with cancer in the hopes of providing both practical and not-so-practical assistance – gas cards, house cleaning, tickets to a Patriots game or a weekend getaway to name only a few. Barbara advocates for the patients, participates in every vote as it relates to expenditure and distribution of resources, offers and pursues creative ideas to further grow the nonprofit, and writes personal thank-you notes to every donor. In just over one year, Amy’s Treat has remarkably touched the lives of more than 480 individuals living with cancer, and Barbara has been a part of each one. Thank you Barbara for your important work!”

“We are proud to be part of YOUR team”
Meg Vaillancourt, Senior Vice President, Boston Red Sox Foundation